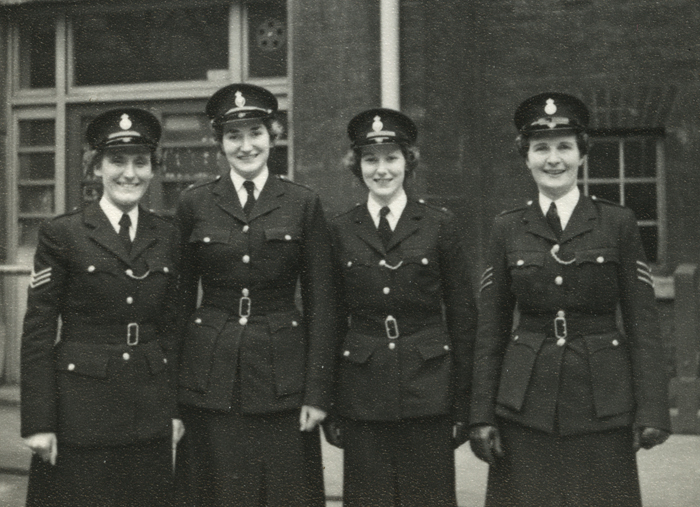 The first women employed by the police were known as Police Matrons, they were civilians appointed to search, supervise and escort women prisoners held at police stations or the courts, and to prepare female bodies brought in to police station mortuaries for examination by the police surgeon. The Metropolitan Police employed their first two Matrons in 1883, and by the 1890s we have evidence of them in the Manchester police. Very often Matrons were the wives of serving police officers.

In August 1914 Miss Damer Dawson and Miss Nina Boyle, a militant Suffragette, founded a committee that later became the Women Police Volunteers, later the Women Police Service. (WPS). Working with Home Office approval, they were a group of over 40 upper class car owning women, who arranged to meet Belgian refugee families arriving by rail in London and convey them to reputable lodging houses, lest the women and girls should be ensnared into organized prostitution, known at the time as the White Slave Traffic. Later they turned their attentions to the suppression of the prostitutes that gathered at the Capital’s railway stations.   Miss Dawson’s brother in law, Captain Kensington, was stationed in Grantham, Lincolnshire and he was instrumental in arranging for “police women” to carry out patrols there, to protect young women in the town from the attentions of the 25,000 men from the 11th Division encamped just outside Grantham. Thus, the first women police officers in the UK carrying out actual policing duties were Miss Damer Dawson, Miss Mary Allen, and a Miss Harburn, all based in Grantham. They wore a uniform designed by Miss Dawson, but were unsworn, that is, they had no powers of arrest. They moved drunks on, visited the families of girls they believed were in “moral danger”, and enforced, controversially, a curfew imposed on the women of Grantham by the army.

At the same time, a “rival” organization was set up by the National Union of Women Workers of Great Britain and Northern Ireland, (NUWW), in the form of voluntary Women’s Patrol Committees. Again concerned with suppression of the White Slave Traffic, they wore an armband and received Home Office approval to patrol in open spaces and railway stations. As the war continued, the Metropolitan Police Commissioner preferred to work with members of the NUWW, while the WPS was engaged by the Ministry of Munitions, supervising the vast number of women amongst the 3 million workers engaged in making munitions. Duties included searching women for smuggled explosives, controlling disorderly conduct in canteens and searching for stolen property in factories.

At the end of the First World War in 1918, the Metropolitan Police took on the recruitment and organisation of policewomen directly and the first Metropolitan Police Women Patrols, uniformed but still unsworn, began to work the streets in February 1919.   In Manchester meanwhile, it had been decided in 1913 to employ two women to inspect women’s lodging houses and supervise the register of domestic servants. From time to time, they were given other duties, including “the detection of fortune tellers”.

In May 1916 a public meeting in Manchester urged the appointment of additional women police, but progress was slow – in 1917 women civilian staff working for the police were offered the chance to patrol in uniform in the City Centre, but by 1921 only four police women were employed by the Manchester Police, and after 1923, they reverted to working in plain clothes. The Chief Constable of Manchester at the time, the otherwise forward looking modernizer Sir Robert Peacock, had little enthusiasm for women police, feeling that they had shown no success in suppressing prostitution, which had been seen as their prime task. He also felt that giving them the power of arrest would not improve their efficiency.

However, a breakthrough occurred in 1921 when Clara Walkden of Oldham Borough Police became the first known sworn-in Police Woman Constable in the Greater Manchester area. Along with two women in the Lancashire Constabulary, they appear to have been the only sworn-in women Constables in the area until the late 1930s. Many authorities still dragged their feet over giving women police powers – some even suggesting that it was illegal for a woman to take the Oath of Constable, because she was physically unable to carry out the arrest of a violent man (this legal challenge was overcome by the Sex Disqualification (Removal) Act of 1919).

Once again, it was the outbreak of world war, that great engine of social change, which led to women being more fully integrated into the police service. In August 1939, the Home Office approved the creation, in time of war, of the Women’s Auxiliary Police Corps (WAPC). This organization would comprise of unsworn women in uniform detailed to assist the regular police force.

War came in September and in Manchester, less than two months after the war started, Chief Constable John Maxwell reported to the City Council Watch Committee that six women were carrying out plain clothes police duties in the force – mainly taking statements from women and children, escorting female prisoners to court and “special enquiries of a delicate nature”. He also referred to the Home Office report about the WAPC. He informed the Watch Committee that he had already had a number of applications from women to join the WAPC, and it was now time to reorganize women in the Manchester Police.   He recommended that the existing six policewomen be given full police powers, granted the status of Constable and given a uniform. He also believed that the newly formed military camps in the area were attracting undesireables and problems with prostitution, which could best be dealt with by women police. He therefore recommended that 20 women be enrolled in the WAPC for the City. The report was acted upon in early 1940, and the first six policewomen Constables for Manchester were:   Edith Lucy Whalley, Emma Jane Ball, Janet Ida Marshall, Alice Vera Vernon, Mary Laurie and Jean L. Stewart. Emma Jane Ball was to be made Sergeant in charge of both the new Women Police Branch and the WAPC.

However, prejudice about the value of women to the police service was still to be found, even at the highest level. In 1941, the then Home Secretary, while encouraging greater numbers of women to serve in the police, remarked: “It is true that police duty is, for the most part, a man’s job, but such work as driving cars, typewriting and attending the telephone can be done by carefully selected women. There is no reason whycanteen duties should not be taken over entirely by women”.

Having two types of female officer in the police – some with full powers, and some, the WAPC, without – could cause operational problems. Some forces adopted the simple expedient of allowing only the sworn-in constables out on patrol, and ensuring those without powers were never let out of the station – spending their time instead behind a telephone or a typewriter. However, the War finally established women as an essential part of the police service, and when the WAPC was abolished in 1948, many joined the service as women constables in expanded Policewomen’s Departments – by 1951, Manchester Police had 34 women officers.

Organisationally though, the Departments remained separate, with entirely female supervision, and with a restricted range of duties. While some regarded themselves as “specialists”, others resented the restrictions placed on them – in Lancashire Constabulary as in many other forces, women officers were not allowed out of the station at night, for example to take a statement, unless they could be escorted on foot by a male officer, or driven to their destination. They were also paid less than their male colleagues.

Gradual improvements in the 1960s saw women carry out more patrol duties and working in a wider range of departments such as criminal records or the fingerprint bureau, but in 1974, when Greater Manchester Police was formed, women were still organised separately as “U.W. Branch”, headed by a female Chief Superintendent. The next major change that really affected the role of women in the police was the 1975 Sex Discrimination Act which abolished the separate Policewomen’s Departments in forces, harmonised pay scales and opened up all aspects of police work to women.

Therefore in Greater Manchester Police by the end of 1975, pioneer female officers could be found in several specialist units, such as PW Karen Corcoran in the Mounted Section and PW Janice Rudkin in the Dog Section, while PW Edwina Sykes became the first female police motorcyclist in GMP and PW Sandy McGurk qualified as the UK’s first female Police HGV driver.   There was much still to be done. While recruitment of women into Greater Manchester Police had accelerated in 1975, as a result of the changes in the law, there were only 408 policewomen out of a total of 6,628 police officers by the end of the year.

The uniform the women wore at the time was not the most practical – in 1974 the familiar white topped cap, known as the “hostess” style was introduced, complete with a tunic without pockets. All equipment was to be carried in an official police handbag, including a small, rather useless truncheon. Skirts were the norm for patrol work, and even after trousers were introduced in the mid 70s, they were initially restricted for use on nightshifts and in winter only. Indeed, it was not until the introduction of body armour, utility belts, batons, speedcuffs and CS spray in the mid 1990s that policemen and police women in Greater Manchester Police received identical levels of equipment and protection.

Nationally, 1987 saw the foundation of the British Association for Women in Policing. The Association sought to raise awareness of a number of issues affecting women in the service, one of which was the presence of women in senior and command ranks. That same year Greater Manchester Police made progress on this issue, when Chief Supt Margaret Gornall became the force’s first female divisional commander, taking charge of the South Manchester Division.